Visit the highlights of Uzbekistan with us and let yourself be fascinated by culture and hospitality. In addition to impressive historical monuments, you will also experience the country and its people while exploring bazaars or hiking in Uzbekistan's mountains.

With more than 2000 years of history, Uzbekistan is a gem that is not yet overcrowded by mass tourism. Visit this astonishing country, which you will remember for the rest of your life. 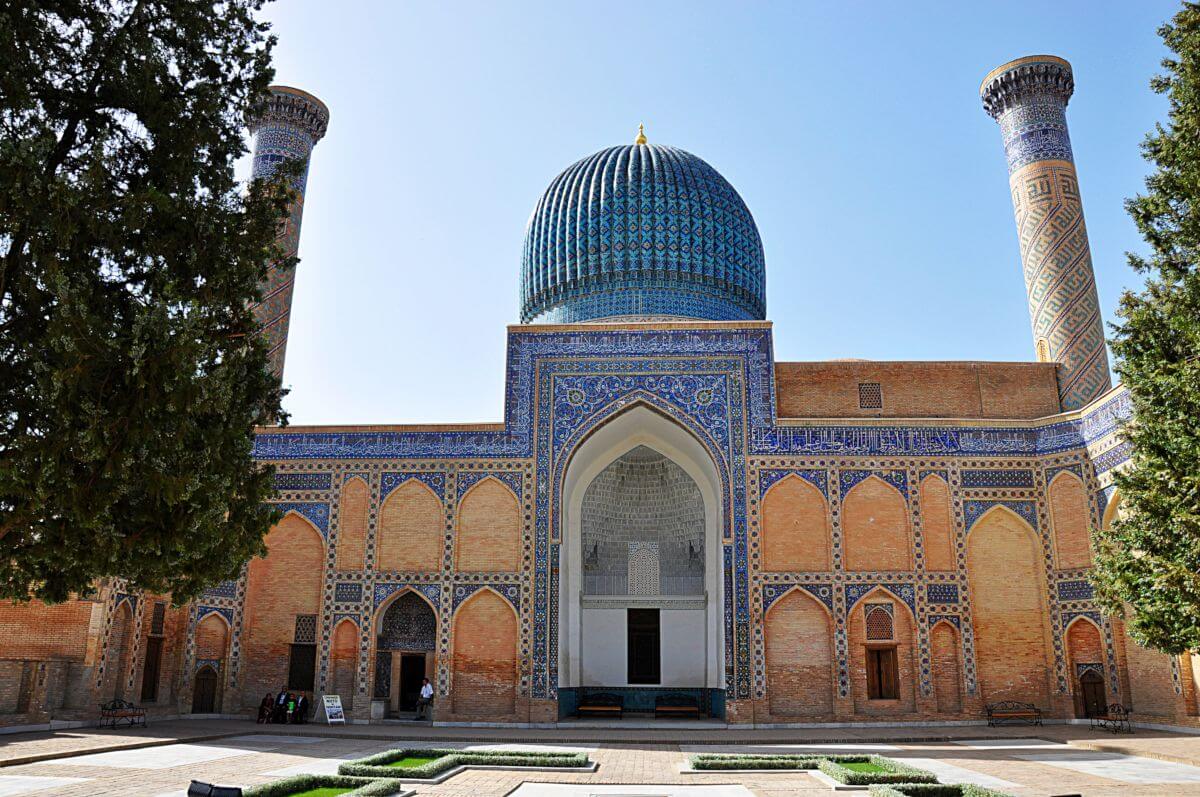 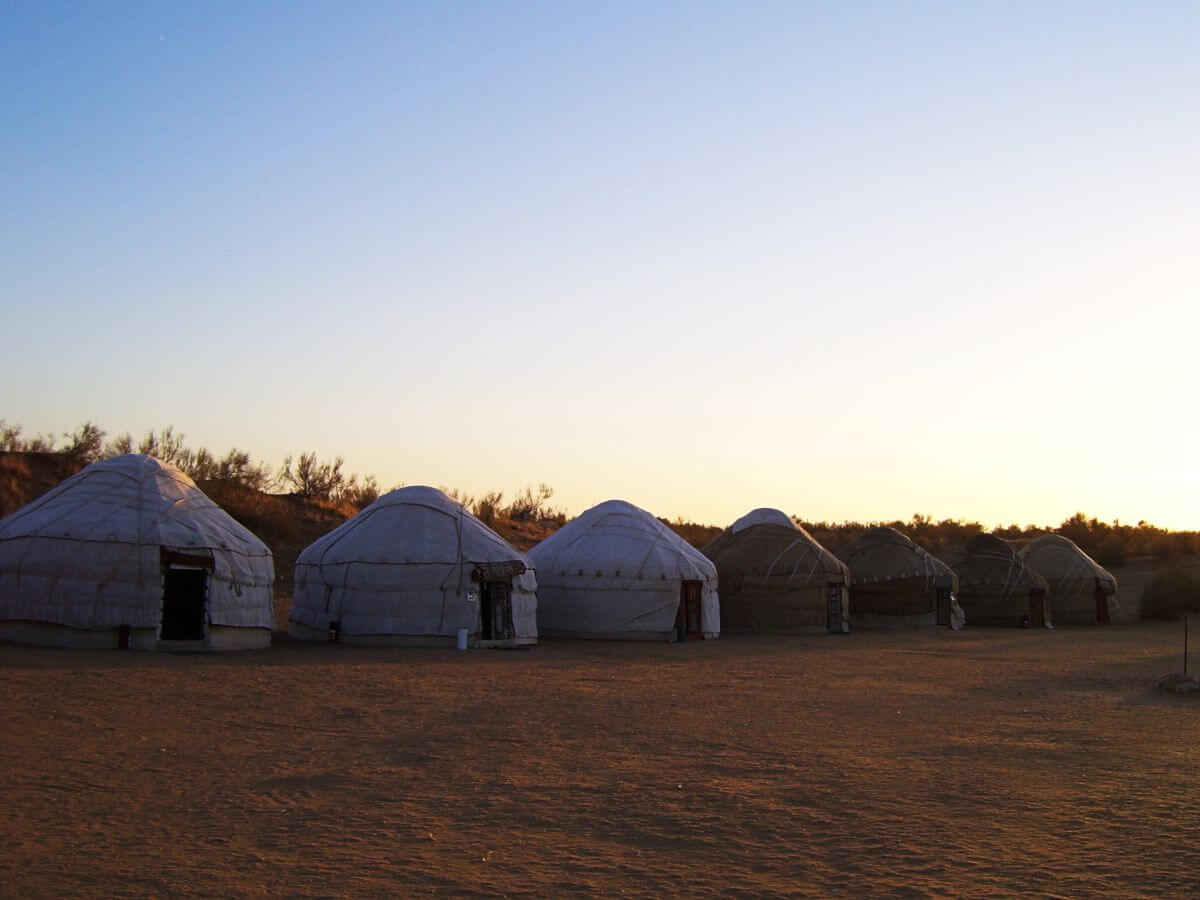 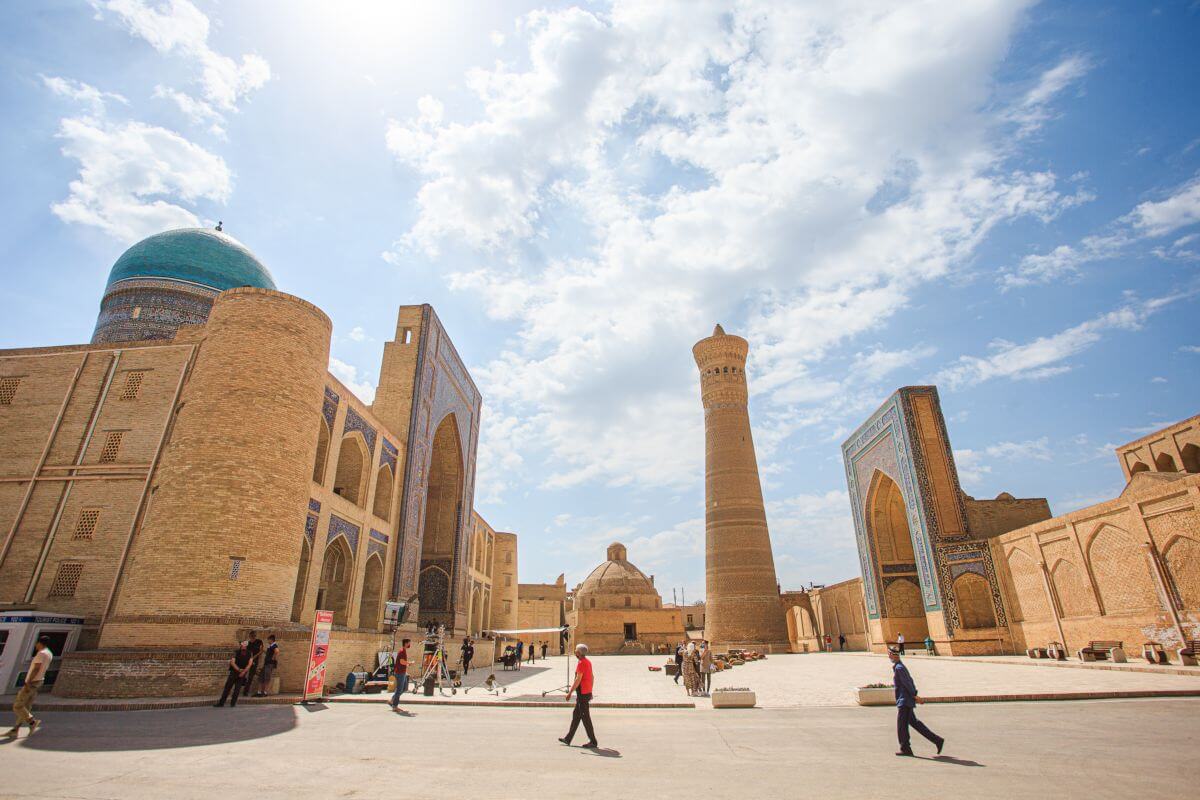 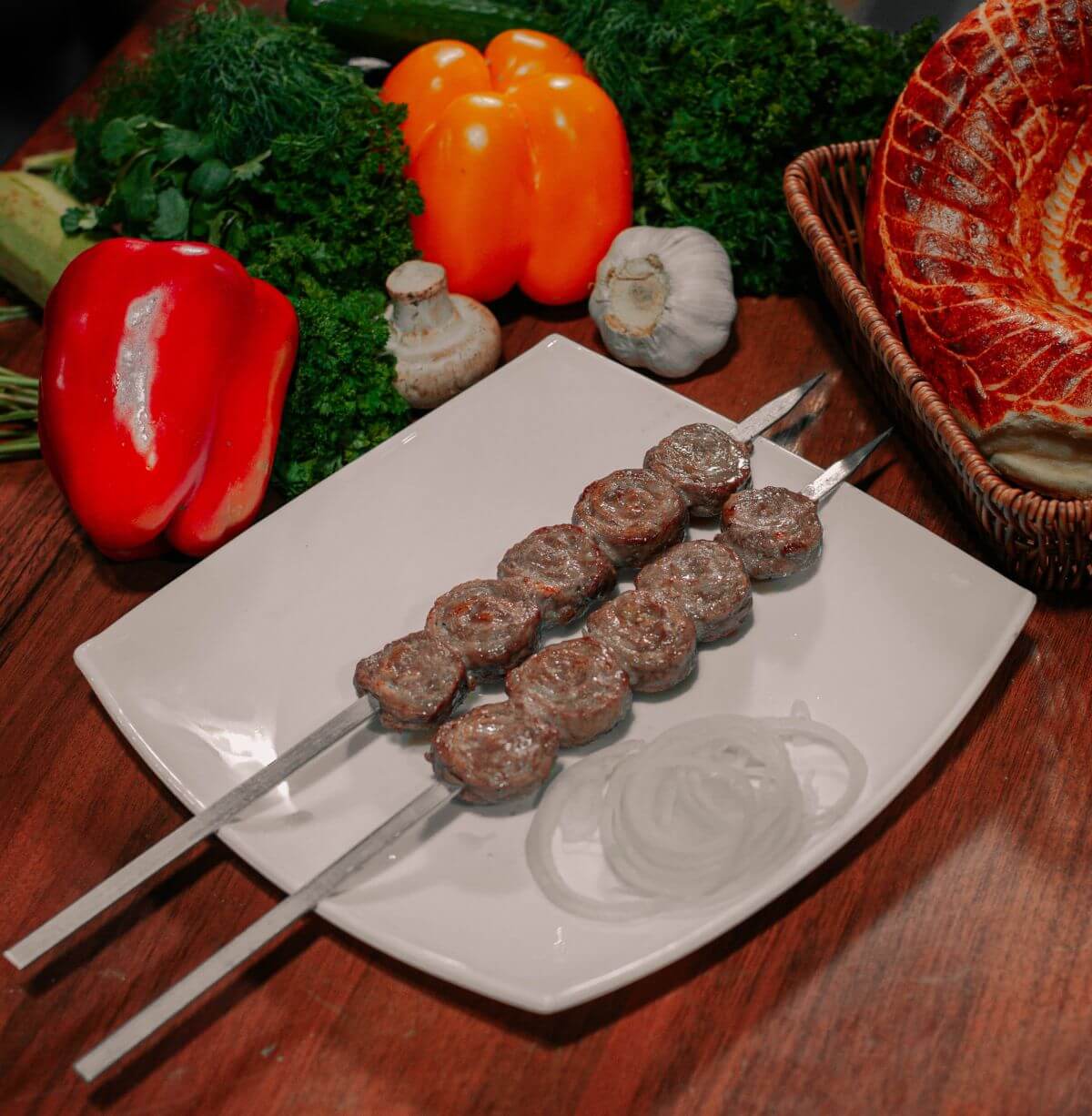 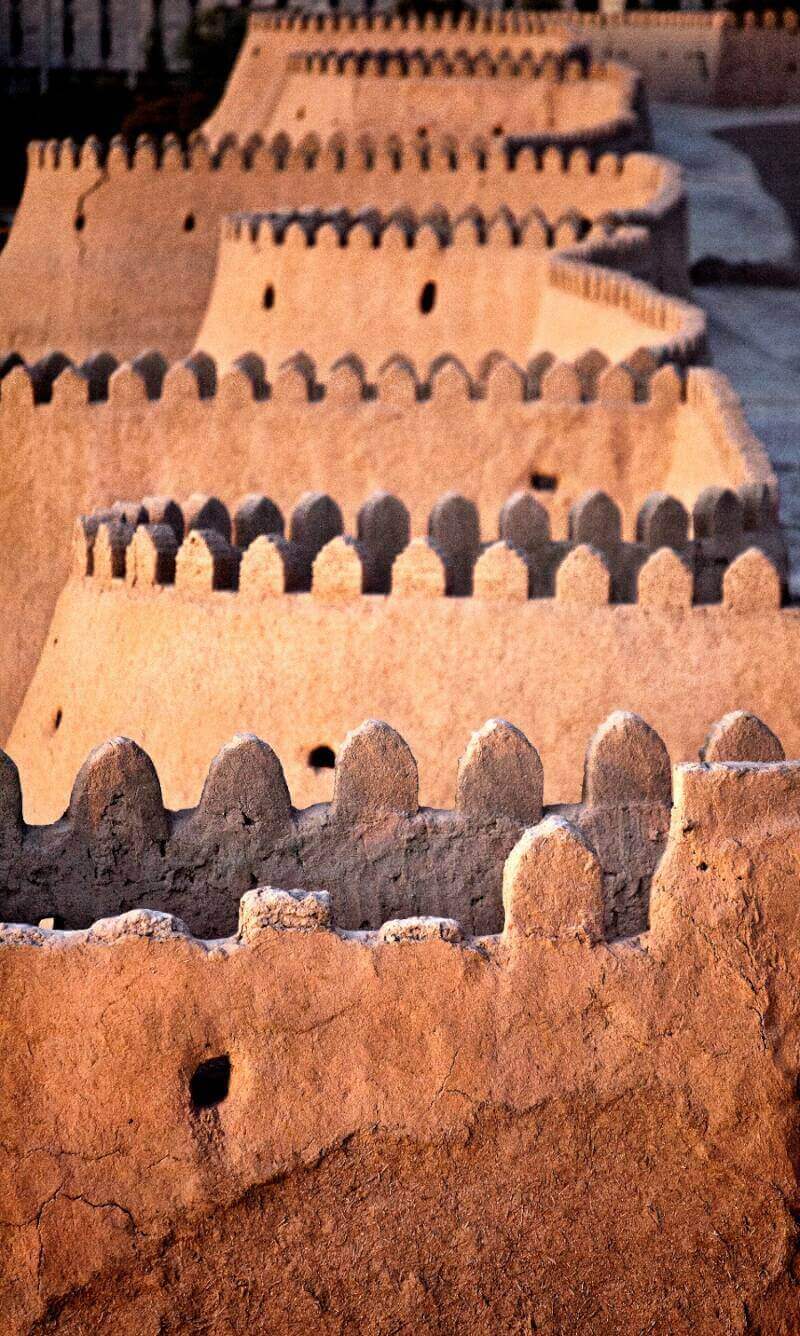 Welcome to Uzbekistan! Your driver will meet you at the airport and drive you to the hotel. Check-in time is 14.00.

Explore Uzbekistan’s capital Tashkent by car. Despite its modern appearance, Tashkent is 2200 years old. Today you will visit the historical part, the complex Khast-Imam, where the famous Koran of Caliph Usman is kept. You will have the chance to experience the local bazaar, Chorsu. In the city’s modern part, you can visit Independence Square, Amir Timur Square and the Museum of Applied Arts. Furthermore, a metro ride is included in today’s itinerary. Many stations of Tashkent’s metro have a very unique design and are considered as one of the city’s attractions. Overnight stay in Tashkent.

Transfer to the domestic airport. Morning flight to Urgench (1h 30 min). Transfer to city Khiva (35 km, 40 min). Meet your guide in Khiva and start a city tour.
Khiva is 2500 years old and was the capital of the Khiva Khanate from the 16th until the 20th century. The city is famous for its well-preserved city wall that surrounds Khiva’s old town, known as Ichan Kala (“inner town”). As the majority of historical monuments are located in the Ichan Kala, you will have a walking tour today. You will visit Khiva’s largest madrasah, Mukhammad Amin-khan, next to which the Kalta Minor (“short minaret”) is located. It’s famous for its unusual shape and decor. The citadel Kunya Ark was the Khan’s main palace until the 19th century when the construction of the Tash-Khovli palace was completed. The latter is known for its beautiful harem. Khiva’s Friday mosque Juma has an unusual design with more than 200 wooden columns. The city’s most holy site is the Pakhlavan Makhmud mausoleum, where many newly married couples come to be blessed. Overnight stay in Khiva.

The duration of the tour is about 5 hours long.

Drive to Bukhara through Kyzylkum desert (450 km, 7-8 hours). After arrival, there will be some free time in Bukhara. Overnight stay in Bukhara.

Please note: Parts of the road are not of high quality.

Bukhara was one of the biggest trading centres and stops for caravans during the Great Silk Road and has a very rich history. Visit the Ismail Samani Mausoleum which is considered to be a masterpiece of the 10th century’s architecture, Chashma Ayub Mausoleum and Bolo-Khauz Mosque. Since the 1st century, the Ark citadel was the residence of all Bukhara’s emirs. One of the most beautiful places in Bukhara is the Poi-Kalon complex (Minaret Kalon, Miri-Arab Madrasah, Kalon Mosque). Stroll through the three trading domes visiting one of the city’s oldest mosques Magoki-Attori. Reach Lyabi-Khauz, the favourite square of local citizens, which is the centre of the old town and surrounded by several architectural monuments. Overnight stay in Bukhara.

The duration of the tour is around 5 to 6 hours.
Meals: D

Continue to explore Bukhara by car today. Visit Chor-Minor Madrasah, which has an unusual architectural style with four minarets. Drive to the holy site of the famous Sufi Bakhouddin Naqshbandi, which is a popular pilgrimage place amongst the locals. Afterwards, visit the Summer Palace of Bukhara’s last emir Sitorai Mokhi-Khosa and Chor-Bakr Necropolis. The afternoon will be free to spend at your own leisure. Overnight stay in Bukhara.

The duration of the tour is 4 hours long.

Drive to Nurata (250 km, 3,5 h). Visit the holy spring Chashma and a local mosque. Continue your drive to lake Aydarkul (50 km, 45-60 min). Feel like a merchant on the Great Silk Road riding a camel in the Kyzylkum desert. Dinner at a campfire (depending on weather conditions), where a local musician will play and sing traditional songs for you. Overnight stay in a traditional yurt.

Start your tour in Samarkand by car. It’s time to explore Tamerlane’s capital, which is one of Uzbekistan’s most famous cities. Samarkand’s architectural monuments will amaze you with their beauty and brightness of colours. The city’s most famous place is Registan Square, which consists of three impressive madrasahs. You will see the largest historical mosque of Central Asia Bibi-Khanum, next to which the famous Siab bazaar is located (closed on Mondays). Shakhi-Zinda, the street of mausoleums, is one of the holy sites, where one of Prophet Muhammad’s cousins is buried. The Gur-Emir Mausoleum was originally built for Tamerlane’s favourite grandson, but later became a family crypt, where Tamerlane himself was buried as well. Ulugbek, one of Tamerlane’s grandsons, was a great astronomer in the 15th century and built a famous Observatory, which allowed him to make the most precise calculation of the length of the year at his time. Overnight stay in Samarkand.

The duration of the tour is around 6 to 7 hours.

After check-out continue the tour in Samarkand. You will visit a silk paper workshop, where silk paper is handcrafted according to the old technique, the Afrasiab Museum and the St.Daniel's Mausoleum, the Saint, who is known in three world religions.
Transfer to train station at approx. 16:00. Train to Tashkent (2h 12 min). Transfer to your hotel. Overnight stay in Tashkent.

The Chimgan mountains are located about 100 km away from Tashkent, with the journey taking about 1.5-2 hours. The Chimgan mountains are a favorite leisure place for Uzbek residents. In winter it’s a popular ski resort and in summer a place to escape from the heat. Drive to Beldersay and have a ride in a 3 km long cable car (if it works) to the summit of Kumbel (2400 m). Enjoy the scenic views and a nice walk. After continue to the Charvak water reservoir, surrounded by mountains. If the weather permits, you will have a chance to swim in the lake. Enjoy time at the lake and then drive back to Tashkent. Overnight stay in Tashkent.

Your driver will transfer you to the international airport.