On our fast-paced hiking tour, you will get to know not only the cultural highlights of Uzbekistan but also the natural beauty of the western Tien Shan Mountains.

Due to the weather conditions, we recommend doing this journey in the months April-June or September-October. In high summer, the hikes would have to start early morning to avoid the summer heat. If you book this tour for April, you will have the opportunity to see wild tulips in bloom. 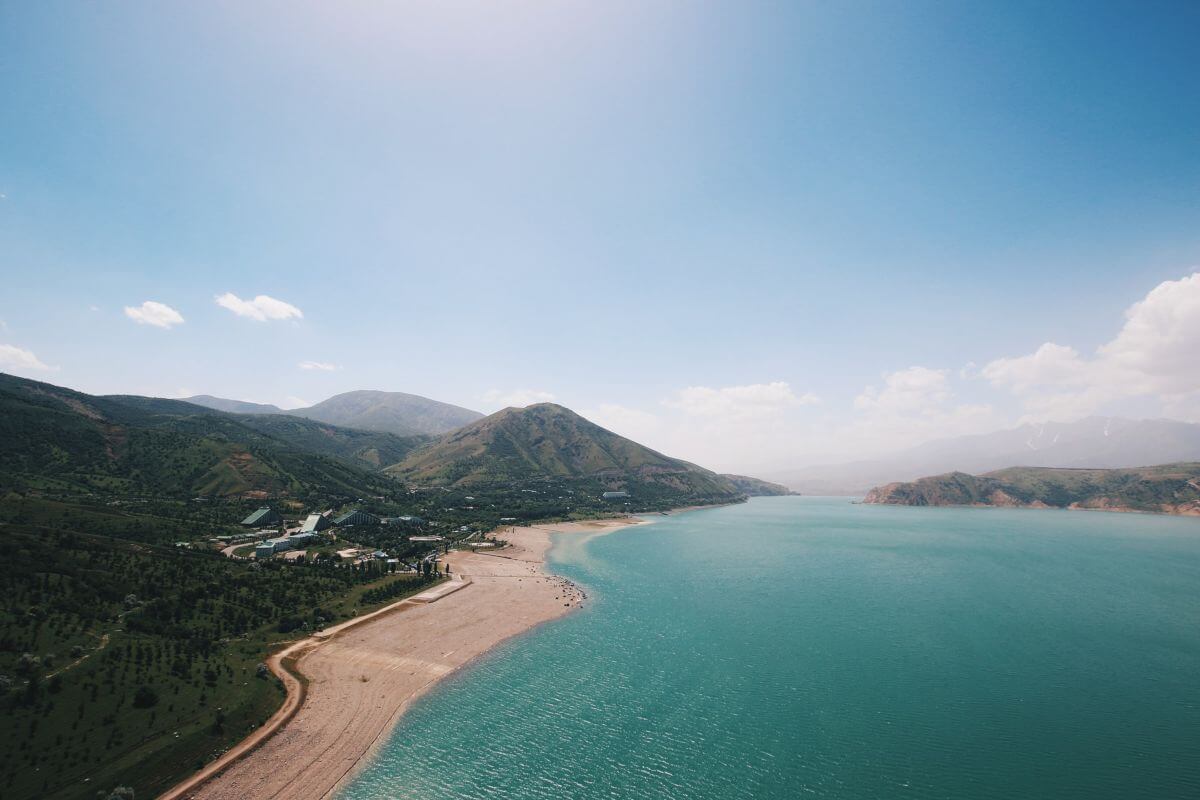 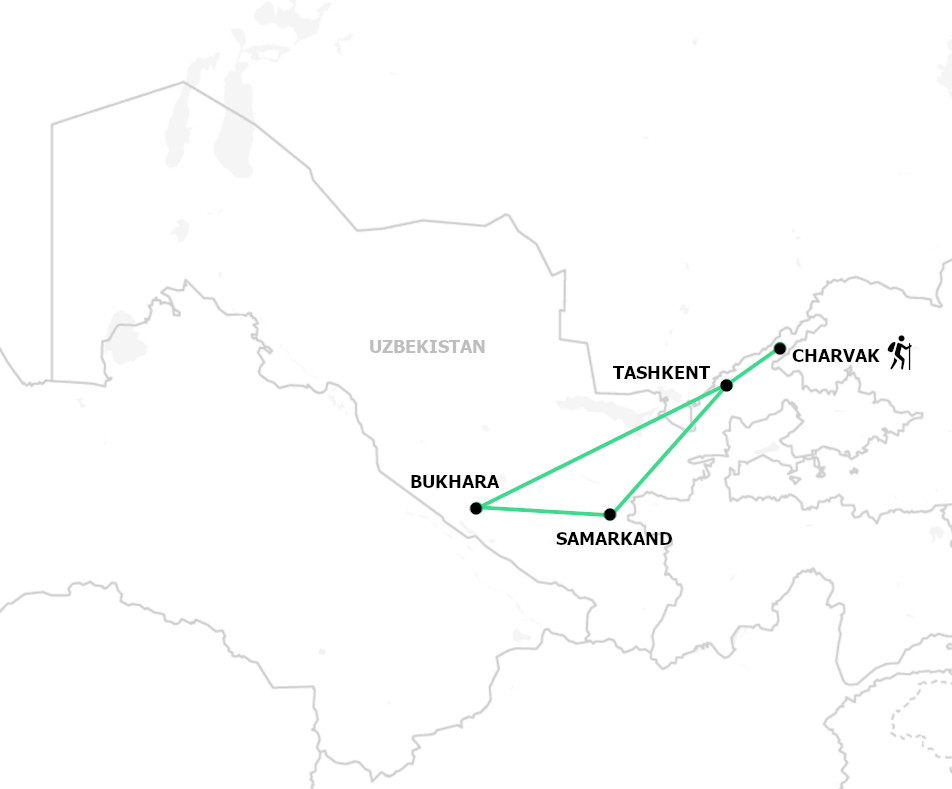 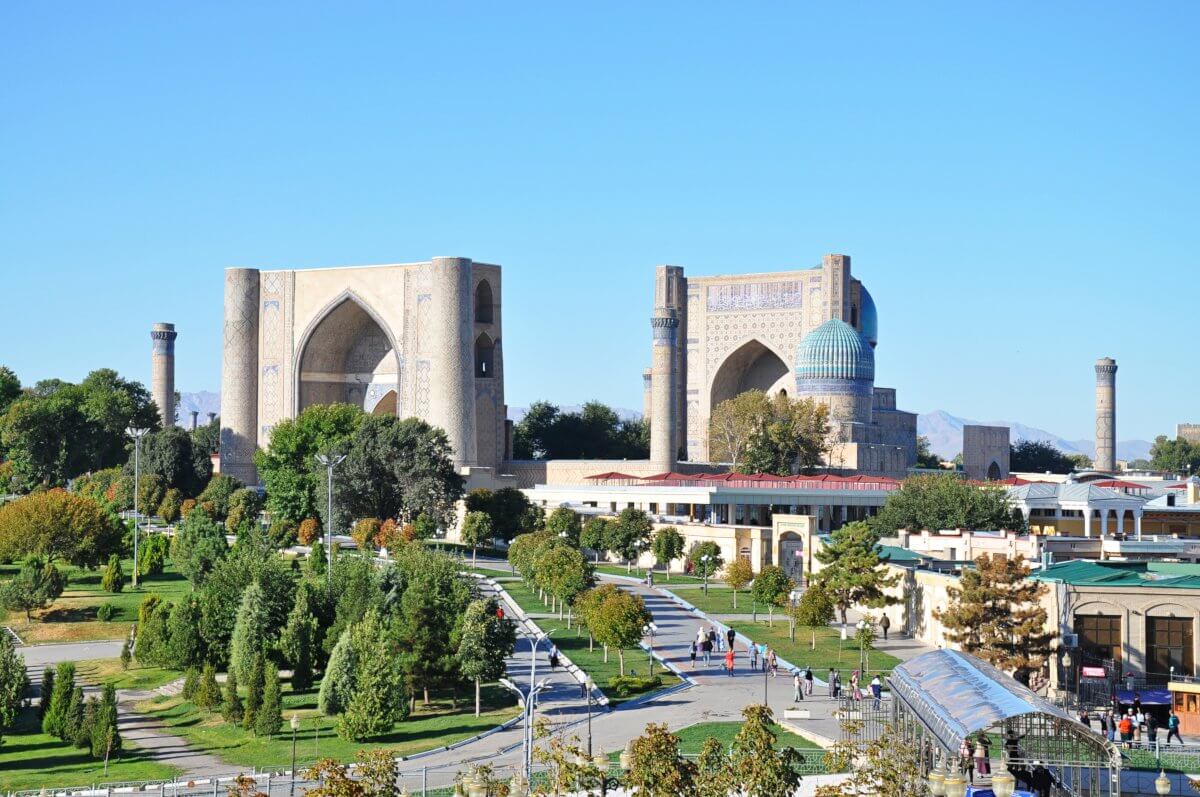 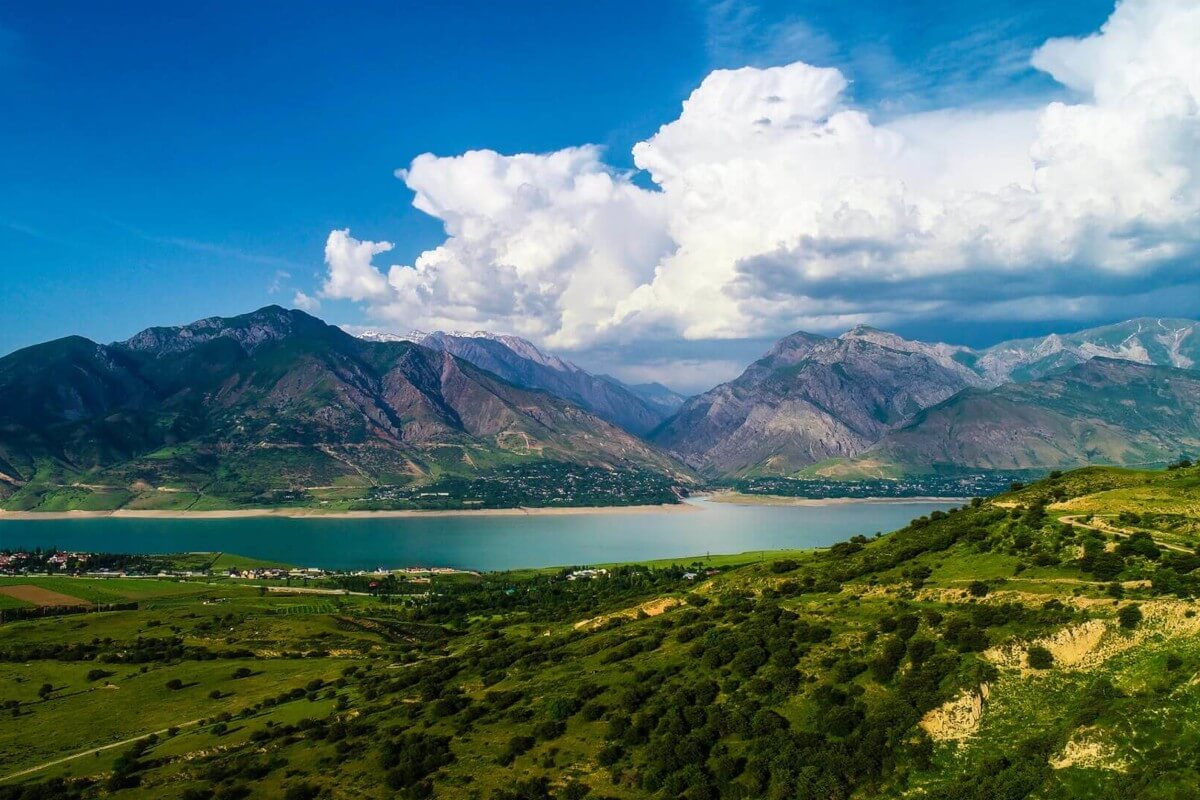 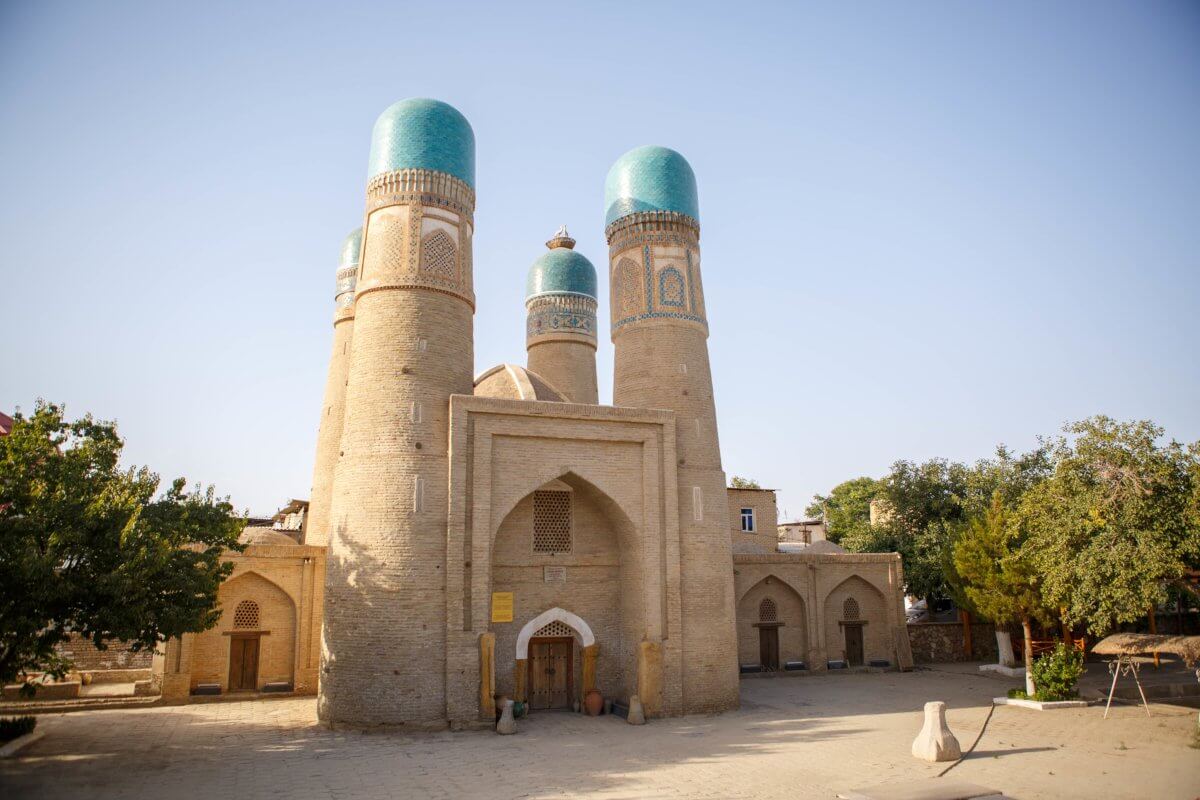 Generally, we choose easy paths for the hikes. Nevertheless, we recommend good shoes. A certain physical condition is also required. Please note that the number of guides in this area is limited, therefore you will hike in a small group.

Welcome to Uzbekistan!
Your driver will meet you at the airport and drive you to the hotel. Check-in time is 14.00. Overnight stay in Tashkent.

Transfer to Tashkent’s train station. Morning speed train to Bukhara at 07.30 (3h 50 min). Arrive at Kagan train station. Your driver will meet and drive you to Bukhara (12 km, 20 min). Meet your guide and start a walking tour in Bukhara.
Bukhara was one of the biggest trading centers and stops for caravans during the Great Silk Road and has a very rich history. Visit the favorite square of local citizens Lyabi-Khauz, which is the center of the old town and surrounded by several architectural monuments. You will visit one of the city’s oldest mosques Magoki-Attori and stroll through the three trading domes before reaching Poi- Kalon complex (Minaret Kalon, Miri-Arab Madrasah, Kalon mosque), which is one of the most beautiful places in the city. The last spot for today is the citadel Ark - the residence of Bukhara’s emirs since the 1st century. Overnight stay in Bukhara.

The duration of the tour is around 4 hours.
Meals: D

Continue to explore Bukhara by car today. Visit madrasah Chor-Minor, which has an unusual architectural style with four minarets. Drive to the holy site of the famous Sufi Bakhouddin Naqshbandi, which is a popular pilgrimage place amongst the locals. Afterwards, visit the Summer Palace of Bukhara’s last emir Sitorai Mokhi-Khosa.

The duration of the tour is 3-4 hours.

Start your tour in Samarkand by car. It’s time to explore Tamerlane’s capital, which is one of Uzbekistan’s most famous cities. Samarkand’s architectural monuments will amaze you with their beauty and brightness of colours. The city’s most famous place is Registan Square, which consists of three impressive madrasahs. You will see the largest historical mosque of Central Asia Bibi-Khanum, next to which the famous Siab bazaar is located (closed on Mondays).  Shakhi- Zinda, the street of mausoleums, is one of the holy sites, where one of Prophet Muhammad’s cousins is buried. The Gur-Emir Mausoleum was originally built for Tamerlane’s favourite grandson, but later became a family crypt, where Tamerlane himself was buried as well. Ulugbek, one of Tamerlane’s grandsons, was a great astronomer in the 15th century and built a famous Observatory, which allowed him to make the most precise calculation of the length of the year at his time.

Transfer to train station at approx. 16:00. Train to Tashkent (2h 12 min). Upon arrival transfer to your hotel. Overnight stay in Tashkent.

The duration of the tour in Samarkand is 5 to 6 hours.

Today begins your introduction to the natural beauty of the Western Tien Shan Mountains in Uzbekistan. Due to the extraordinary diversity of flora and fauna, this area was included in the UNESCO World Heritage List in 2016. Transfer from Tashkent to Charvak (about 100 km, 2 h), where you will start your first hike. Today's destination is Patandazboshi Mountain, which offers a beautiful view of the region. Ascend to the summit on an easy hiking trail. Enjoying breathtaking views of Lake Charvak, several rivers and mountain peaks, you will have a picnic break at the top of the mountain. Your guide will tell you about the flora, fauna, and geography of the National Park. Transfer to the hotel. Overnight at the Charvak water reservoir.
Walking distance: 11 km
Meals: L (picnic)

Today's excursion leads you to the Urungach Lakes, also called Jade Lakes because of their color. Drive to Ugam-Chatkal National Park (about 50 km, 1,5 h). Ascent to the lakes on an easy hiking trail. The two lakes are at different levels: the upper lake feeds the lower lake through underground drainage. Picnic lunch on the lakeshore. Enjoy the tranquillity of the Uzbekistan mountains. In summer you have the opportunity to swim in the lake’s clear water. After the hike, transfer back to the hotel. Overnight at the Charvak lake.

Walking distance: 8 km
The roads in the center of Ugam-Chatkal National Park are not in very good condition.
Meals: L (picnic)

On the last day of your excursion to the Tien-Shan Mountains, you will hike to the Paltau Valley. The original name is of Turkic origin "Pulat Tau", which means "Iron Mountain". It appeared due to the rich deposits of iron. After a short crossing, a hike begins along a small river to the 25-meter-high Paltau waterfall. The trail continues to a birch grove at 1,430 meters, in the shade of which you will stop for a picnic. The way back is along the trail, that will lead you to the cave, which is a natural landmark. The trail continues to the site of the ancient people of the Paleolithic period - the grotto Obi Rahmat. Your guide will tell you about unique discoveries in archaeological research. Return to your car and transfer to Tashkent (approx. 100km, 2h). Overnight in Tashkent.

Explore Uzbekistan’s capital Tashkent by car. Despite its modern appearance, Tashkent is 2200 years old. Today you will visit the historical part, the complex Khast-Imam, where the famous Koran of Caliph Osman is kept. You will have the chance to experience the local bazaar, Chorsu. In the city’s modern part, you can visit Independence square, the Amir Timur Square and the National Museum of History. Furthermore, a metro ride is included in today’s itinerary. Many stations of Tashkent’s metro have a very unique design and are considered as one of the city’s attractions. Overnight stay in Tashkent.

Transfer to the international airport.